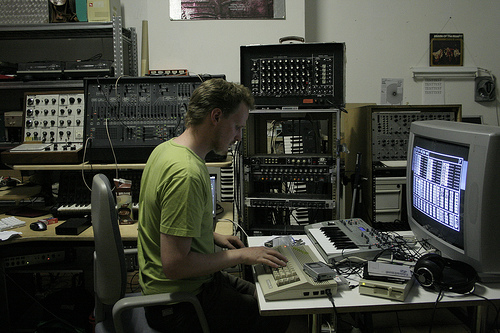 Since 2007, the allround venue Worm in Rotterdam has housed CEM – a studio that dates back to 1956. Last week, I had the opportunity to spend 4 days there, amounting in around 20 (sketches for) new songs. These will be released over time, but for now you can listen to three tiny teasers at wormstudio.

I used the Arp 2500 and a Commodore 64. I sequenced, played the keyboards and tried different ways of synchronizing them. Eventhough the studio has so many machines to use, I deliberately focused on one in order to gradually improve my trial and error methods (being somewhat inexperienced with modular monsters).

The C64 has analogue filters and is not as deterministic as other computers – something I always appreciated. I saw this residency as an opportunity to amplify and recontextualize these characteristics, in order to take the C64 into a new ultra dimension.

Neither of these machines are optimum for setting exact tempos. Unlike today’s standards they are influenced or even determined by electric currents. On the 10-step sequencer of the Arp, you have a knob to set the tempo, and every millimeter counts. To me it also seemed to fluctuate a bit in the tempo, possibly caused by other signals leaking into the clock signal. (This can be solved, but I like to encourage these things)

On the C64, you normally have predetermined tempo-settings to choose from. If you hear a C64-song, it will likely be in either 125.31 or 150.37 BPM. In European PAL-country that is, because the tempos are derived from the electric current.

However, with my dear Defmon software I can set the tempo with maximum precision – down to a tick of the processor. Going out of the inherent tempos however, has consequences for the sound. You can no longer be sure that envelopes and loops sound the same. To avoid this, I usually have the C64 as master, but this time I adjusted the tempo after the Arp.

The process was this: output the clock signal of the Arp as audio, sample 2 minutes of it, analyze the BPM, convert the BPM into hex-values according to the other speed settings of Defmon, and you got it synchronized. Sort of.

I can hear all you tech-geeks sighing over this lamer solution. But it was wonderful to leave the machines running, hearing them mutate by themselves since they were slightly out of sync, or due to electrical leakages in the Arp and uncontrolled bugs in the C64. From a technical point of view, this might be possible to do with a laptop, but this was sometihng profoundly different from working with über-data-control.

All this amounted to several hours of recordings. Some of these 30 minute improvisations can be cut up in parts, and overdubbed with more C64, to create songs that also relate to eachother quite specifically. But we will see what happens. I already miss that studio with tropical heat and sparkling beats!

> Listen to a few excerpts 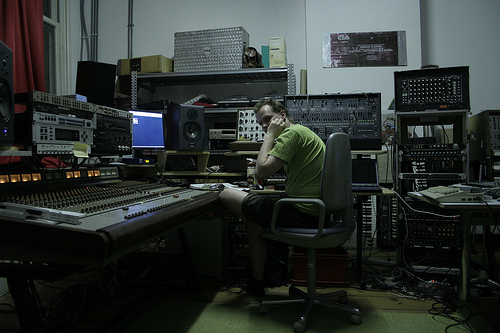