Excerpts of 30-minute performance by me & Raquel Meyers. Made with two C64s, a videomixer and a delay pedal. The music was composed completely from scratch, live infront of the audience, and all the visuals are text graphics.

How to make C64 music

I recorded myself making some beats from scratch on the C64. Acid funk skweee something? Nothing fancy, but gives you a peek into how it works. Or not. But just copy all my moves and then you have a C64-song!

Obviously there’s lots of boring parts, because this wasn’t supposed to be a live jam like 2SLEEP1 or sth. Skip and be happy.

The Ferret Show is a live audiovisual musical that was performed live in Stuttgart. Now it’s available as free kopimi MP3 at Upitup! It’s a jazz ambient pop frenzy dub session, performed by me and the amazing band from Uwe Schenk trifft. And PETSCII visuals by Raquel Meyers.

> Check out the video recording

The Ferret Show: A Musical With Uwe Schenk Band

This is a 20-minute musical performed by me, 4 musicians and Raquel Meyers. Uwe Schenk rearranged my songs for bass, saxophone, harpsichord (spinet) and drums. Raquel animated the story with text graphics, and sequenced it live.

Most of the songs are tightly arranged, but others are quite improvised. I used a tracker to change some songs on the fly, and also played the C64 as a piano using Cynthcart. Quite a challenge to be as pro as the Uwe Schenk Band!

The videos are available in better quality at Uwe Schenks website. The original songs are either unreleased, from here or Cherry CD or perhaps lurking around on internet2008.

Big up to Uwe Schenk and Dragan Expensiveshit for making this happen! 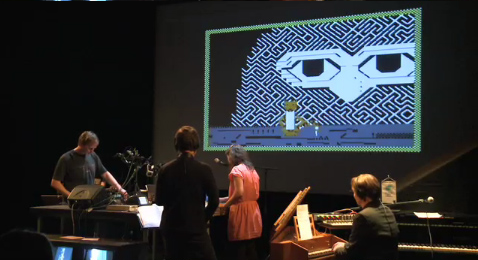 Last year I made a fax performance, where we had a phone line open for incoming faxes, and another one for internal PETSCII faxing. There is now a Tumblr that shows one of these faxes every day. 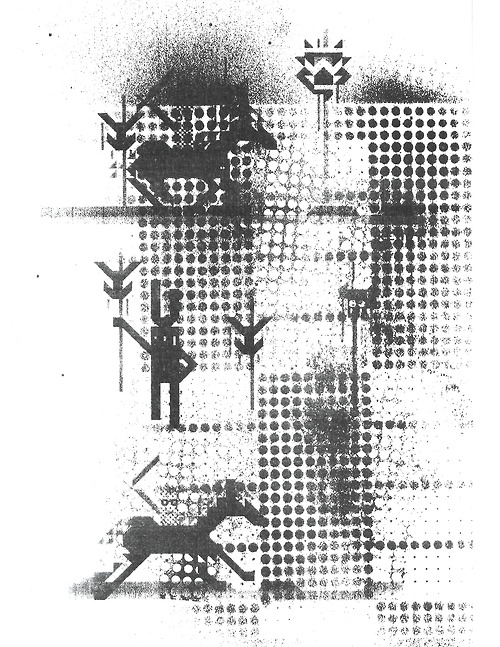 As for the music, I turned pre-made songs into droney jams, and I drowned it in Ableton delays. It was filmed by TVMarineret, who did some pretty hardcore editing of the material. The first part is here and contains more accordion and clownery.

Excerpts from a gig with four C64s at the chip/noise event Bit Brus in Gothenburg, 2012. Is this the first concert ever with 100% text mode PETSCII? Performed by Goto80 and Raquel Meyers.

A little noisy jam, with Raquel Meyers on the visualz. Especially happy with how I managed to make the C64 sound like someone who can’t play the flute.

2SLEEP1 is a playlist of audiovisual performances in text mode, designed to make you fall asleep. The idea is to show the music being composed in real-time (Exedub) along with typewriter-style animations (e.g. Sjöman).

Both the music interface and the graphics are built up from text symbols. This means that the (graphical) objects can work together with the (musical) instructions, on a visual level. Vank is a first rough test of this and Matsamöt makes a similar thing, without the improvisation. Finally, Echidna is a silent movie with semi-live music.

Made by Raquel Meyers and me, mostly using c-64 and Amiga. The videos are early explorations of new methods, so it’s rather brutal at times. Greetz to Poison (rip) and Toplap! 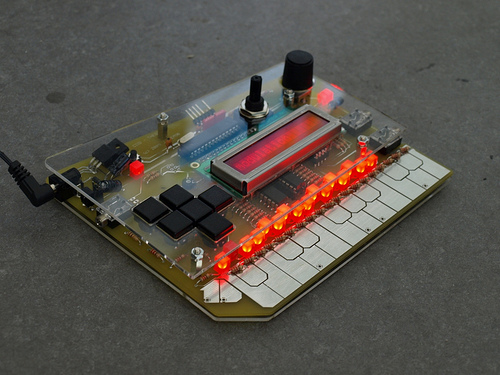 Two years ago I participated in a jam with the Cheap, Fat and Open synthesizer/sequencer at a robot festival i Denmark. The CFO-project is somewhere inbetween open source, chipmusic and interface-hacking. I got a chance to build one at MFRU in Slovenia last year, and be part of a jam again. Not sure if it was recorded or not, though. But it was great to import small tracker patterns into the CFO, and hopefully I will buy the cable I need and start to make more stuff with it at some point.

But yeah, thought I’d link to the old jam since I forgot to do that before. Bear in mind that these jams are experiments. We were mostly trying to learn. Except for the sax-player – he knew what he was up to! CFO jam at Robo Days 2009.

So I thought I’d start using my Soundcloud account. Here’s a recording from a gig that I was supposed to do at WORM in Rotterdam, but flight delays & bla-bla, so, yeah .. it didn’t really happen. It’s slow Commodore 64 beats, re-arranged and remixed live in Defmon, with some sloppy delays and stuff added. Dub-smelling rumbatronica going towards entropical paradise. There’s a lot of mistakes, since it’s just a test. But they probably just serve as tasty ornaments.

Most of the songs are unreleased. The last song (Ponky) was released in Furtherfield’s The Sound of Live Performance a while ago, but a very different performance of it. In this mix there’s also Linkan and the new age ambient song can be found here.