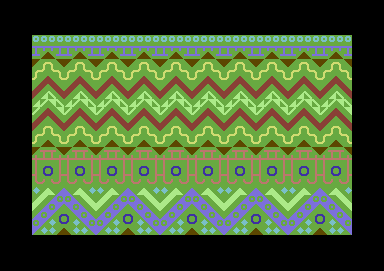 Another LCP has passed. A good one, as usual. I brought a C64 with what I thought was a broken SID-chip. I thought that I’d finally destroyed it despite the magical SID CONDOM that Mogwai built and gave to me 3 years ago. My idiot-trick was to take out the cartridge while the computer is on. But not even that killed the SID. The SID CONDOM is the shit (but Mogwai doesn’t have time to build you one – haha pilutta dig).

My official releases were:

> Matsamöt – an ambient song with a beat. It was voted as one of the worst tunes, which can be a very good thing! It will be featured in the next release at Chipflip.

> In the name of the Sword – an epic text mode demo by Linde, Acid Terrorist and me. Sort of similar to the Acid Burger demo.

And some other things I liked:

> Rambo. A chronicle of.. – Twoflower’s identical copy of the title-pic from the old Rambo-game. Although it’s visually identical, the stored data is completely different, due to the way that the C64’s stores pixels. It “is” not the same picture.

> 2011 – A press space odyssey – an unfinished demo with the strange progressive oldskool style that only Offence delivers.