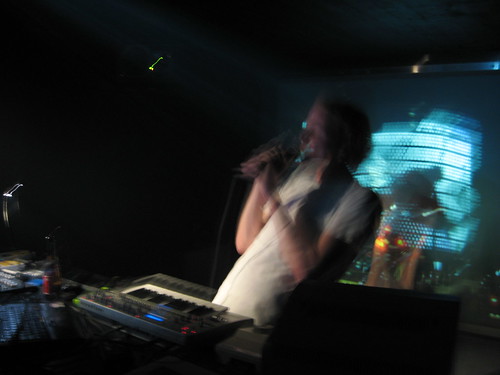 Ait, so first up was Brussels on January 19th. The day before I bought a new suitcase to stop the airport people from destroying my gear in my crappy backpack, and I also got a new anti-funky haircut. Yes! I arrived at Mediaruimte to discover that the SID-chip in my C-64 was broken, again. So was the suitcase. So I did some LSDJ-improvisations instead, which was good enough I guess. M-.-n also played a nice set with LSDJ and his own GP32-tracker LittleGPTracker. Yeah, and I just missed the Touch exhibition by Lab[au], where you can pixel-animate a skyscraper. Check out the videos!

photo by psi36, more of his goto80-photos here.

The day after I had a rally drive to Verviers and the Bubble’s Skate Park! It’s a small place but the two local acts were really fucking fresh. Lovely gameboy beats by Qwertypak and his MC’s (video) and crazy experimental didgeridoo + 2xC64 set by JMX. I also enjoyed the breakcore set by Adrenalien!